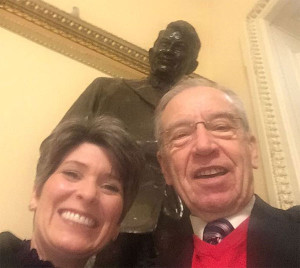 A selfie of Senators Joni Ernst and Chuck Grassley tweeted by Grassley prior to the State of the Union address.

Governor Terry Branstad made the same appeal on Monday, urging Donald Trump to choose Joni Ernst as his partner on the ticket.

The 45-year-old Ernst retired from her career with the Iowa National Guard last year as a lieutenant colonel. Grassley says Ernst’s experience in the Guard would benefit a potential Trump administration.

“She knows the military well and I think the military would be a weakness from a policy standpoint for the president and that would help,” Grassley says. A spokeswoman for Ernst says Ernst is focused “on serving Iowans” and collecting the concerns and ideas of Iowans firsthand and “turn that feedback into action in Washington.”

While Governor Branstad says he’d like to meet in person with Trump to recommend Ernst for V.P., Grassley says he’d also like to talk one-on-one with the billionaire about policy issues. “I would want to meet with him to acquaint him with Chuck Grassley, the whistleblower protector, the person that is going to be pushing transparency in a Trump administration, just like I do in a Bush or Obama administration.”

While Trump has turned off some Republican voters, Grassley says, “We’ve got plenty of time for the division within the party now to be worked out and that process is already underway.”