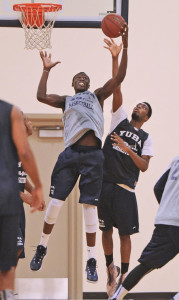 Iowa State’s prized recruit will remain in the NBA Draft. Emmanuel Malou was considered one of the top junior college players in the country and as a sophomore averaged just over 15 and a half points and nearly eight and a half rebounds per game at Yuba College in California.

“Manny has informed us that he will stay in the NBA Draft,” said Iowa State coach Steve Prohm. “We wish him the best as he pursues his dream of playing basketball professionally in the NBA.”

The native of Melbourne, Australia, signed with the Cyclones last November.

“After careful consideration, I have decided that it is time to pursue my NBA dream and sign with an agent,” said Malou . “I know that it is going to require a huge amount of work, but I am motivated and excited for the challenges that lie ahead. I would like to thank all the staff at Iowa State for all that they have done for me. I want to wish them and the players the best of luck in the coming season.”