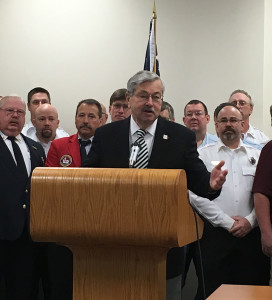 Governor Terry Branstad has signed a bill into law that launches the effort to build a new statewide radio communications system for every law enforcement and emergency response unit in the state.

“This was a big, complex, difficult issue to resolve,” Branstad said this morning.

Emergency responders in New York City found they could not communicate effectively when terrorists struck the World Trade Center nearly 15 years ago. States around the country began building new radio systems so all emergency responders could communicate with one another. Iowa is among the last states to act.

Branstad signed the bill into law this morning in Adel, since Dallas County will be the first to connect to the new system.

“When an emergency event happens and an Iowan calls 911, they deserve to have first responders that can communicate with each other via their radio system,” Branstad said. 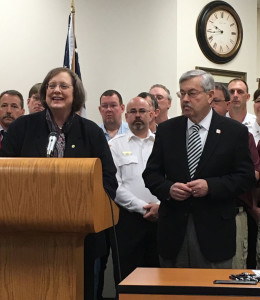 Iowa Public Safety Commissioner Roxann Ryan said the system will let first responders talk to one another during disasters and big events, like the Iowa-Iowa State football game.

“Within two years we should have the bulk of our system built out,” Ryan said, “and we’ll cover about 96 percent of the population.”

The state of Iowa is providing a “baseline” radio network. Cities and counties would have to pay extra for add-ons that improve radio communications in basements and hallways.

“The equipment that we’re building now is completely different from what we saw in 2001. These are really computers and not just radios, so it’s not a walkie talkie kind of thing,” Ryan said. “…What the other states have experienced is that during tornadoes and natural disasters, a lot of times these radios are the only means of 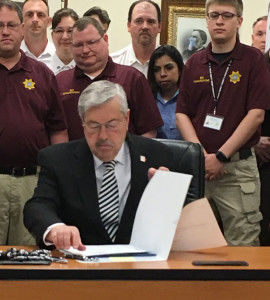 The communications hub for four Des Moines suburbs will be the first city system to join the new network and Branstad expects other central Iowa agencies will be among the first to join.

“We think it’s going to be an efficient and cost effective system and something that will save lives and make it easier for us to respond when we have disasters and emergencies,” Branstad said.

The project’s total cost is estimated to be $58 million. The state will pay a yearly lease. The lease money in the first year will come from an emergency 911 charge Iowans pay on their land lines and cell phones.