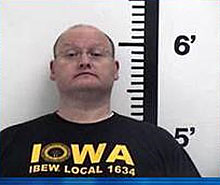 An admitted bicycle-riding groper is getting jail time.

Iowa City police arrested 44-year-old Anthony Long in June of last year. They say Long was riding his bike up to women who were walking or jogging near Willow Creek Park and groped them.

KCRG-TV reports that Long pleaded guilty to two counts of assault with intent to commit sex abuse and will spend 45 days in the slammer.

He also will have to register as a sex offender and is subject to two years of supervised probation.