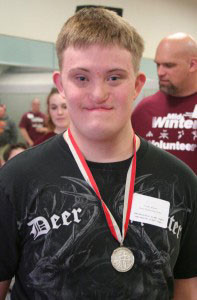 The 32nd annual Iowa Special Olympics Summer Games will open next week at Iowa State University in Ames. Stephanie Kozer is spokeswoman for the games, which are expected to draw competitors from across the state.

“We have about 2,600 athletes coming, coaches, volunteers, staff, local law enforcement,” Kozer says. “The events kick off next Monday with our Law Enforcement Torch Run.” That event involves about 500 law officers from across Iowa who will be running, walking and biking along predetermined routes, headed for Ames.

“They will converge downtown on Thursday where they’ll take the flame and go to Hilton Colliseum at Iowa State to kick off the opening ceremonies,” Kozer says. “Then, they hand off the flame to one of the athletes who lights the Olympic flame and signifies the opening of the games.” A wide variety of sporting events are scheduled.

“We have competitions going Thursday, Friday and Saturday, everything from tennis to athletics, which is track & field, cycling, bocce, soccer,” she says. Admission is free. Learn more at: www.soiowa.org