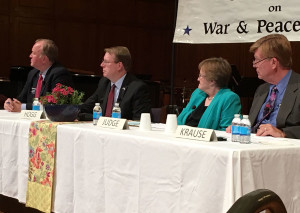 The four Democrats running for the U.S. Senate in Iowa are raising serious concerns about the Obama Administration’s use of drones to target terrorists overseas.

The candidates appeared late this afternoon at a forum sponsored by the “Stop The Arms Race” PAC.

Patty Judge said it’s important to take out “high value” targets, but she contends the Pentagon, not the CIA, should be running the U.S. drone program.

Rob Hogg said he has “deep concerns” because our enemies may use drones to strike us.

“If we can do things that keep the men and women in our services out of danger by using them for informational purposes, that’s probably a good thing,” Hogg said, “…but we’ve got to be really, really careful.”

Tom Fiegen told the crowd there are too many civilian casualties with drone strikes.

“You wonder why there are more terrorists? It’s because we use drones to kill people who are innocent victims,” Fiegen said, to applause.

Bob Krause said there is a “joystick mentality” that goes with the operation, but he’s not calling for abandoning the use of drones.

“I don’t know that I’m willing yet to say that we need to stop targeting and pinpointing the leadership of ISIS,” Krause said.

The Democratic candidates also agreed the U.S. should not use torture when interrogating terror suspects. Regarding two of President Obama’s foreign policy achievements, all four expressed opposition to the Trans Pacific Partnership trade deal, but they were united in their support of the president’s nuclear agreement with Iran. Judge said it will help maintain peace in the Middle East.

“However, we must also understand and realize that we have got to be very vigilant,” Judge said. “There needs to be careful monitoring.”

Hogg said people overlook that the deal had international support from U.S. allies.

“Even Ronald Reagan used nuclear arms negotiations with the ‘Evil Empire’ to bring moderation to the Soviet Union,” Hogg said, “so why shouldn’t President Obama be able to do that with Iran?”

Krause said it was “nearly criminal” for Senator Chuck Grassley to sign onto a letter Senate Republicans sent the “Supreme Leader” in Iran.

“It will probably never be prosecuted, but it was clearly wrong,” Krause said, “and it played into the hands of the far right wing in Iran.”

Fiegen described himself as a peace activist who supports the deal with Iran.

“I believe it represents a triumph of diplomacy over war,” Fiegen said.

Donald Trump was a frequent target during the two-hour-long forum, as was Senator Grassley. The four candidates are competing to win the June 7 Democratic Primary and the chance to face Grassley in the General Election.