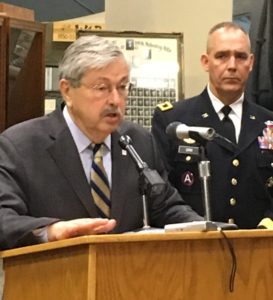 Iowa’s governor is defending a veterans memorial that’s been set up on public land in Albia. Americans United for Separation of Church and State is threatening to sue the city and Monroe County, because the display features 21 crosses. Branstad likens the Albia display to the cemetery for World War II veterans in France.

“The white crosses at Albia remind me of what I saw when my wife and I visited Normandy after the 2010 election,” Branstad said this morning. “It’s a very moving experience.”

More than 2000 people were in Albia yesterday for a rally to show support for the “Welcome Home Soldier” memorial. Iowa National Guard Adjutant General Timothy Orr isn’t surprised by the turnout in Albia.

“I think it’s indicative of what we see all across the state of Iowa,” Orr said late this morning.

Orr points to the community support Iowa National Guard soldiers get when they are deployed, as well as the recent outpouring of respect for an Army veteran and Des Moines policeman who was killed in a traffic crash.

“It’s an honor that our communities and our civilians recognize the importance of the sacrifice of what men and women have given,” Orr said.

Orr and Branstad made their comments today during a visit to the Gold Star Museum at Camp Dodge in Johnston.