You are here: Home / Military / Thousands turn out to support soldier memorial in Albia 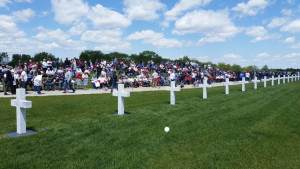 Albia rallies in support of the soldier memorial.

The City of Albia nearly doubled in size Sunday for a rally to show support for the “Welcome Home Soldier” Memorial.

A Washington, D.C.-based group has threatened to sue, arguing the memorial’s 21 crosses violate the separation of church and state since the display sits on public land. Jim Keller, founder and president of the “Welcome Home Soldier” board, said the families of veterans paid for each the crosses.

“I always told everybody when you come here, I want to tear your heart out and hand it right back to you,” Keller said. “I think that’s how much I appreciate everybody that fought for our country.”

Officials estimated a crowd of more than 2,000 turned out in Albia for the event. Lieutenant Governor Kim Reynolds told rally-goers the threatened lawsuit is an attack on religious liberty.

“It is up to us to stand up and say: ‘We will not tolerate this infringement on our rights. We will not allow this memorial to be taken down,'” Reynolds said, to cheers.

Reynolds said “elitists” are counting on Iowans to lose their resolve.

“We must stand together in this fight like each and every one of you are doing here today and, collectively, we must say: ‘Enough is enough,'” Reynolds said.

State Senator Ken Rozenboom of Oskaloosa represents the area and he said this is a battle between “political correctness” and the free speech rights of Albia families who had the names of loved ones carved in the crosses.

Last year, Americans United for Separation of Church and State raised concerns about a veterans memorial in a Knoxville city park that depicted a soldier kneeling next to a cross. Two members of the Knoxville City Council who voted to move that memorial to private land lost their bids for reelection.