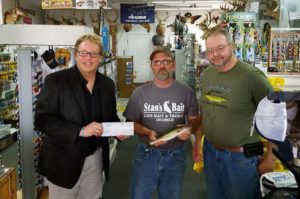 A Spencer man caught a fish in the middle of the night that was worth hundreds of dollars.

Ten “tagged” fish were released in the Iowa Great Lakes for the annual “Walleye Weekend” fishing tournament on May 7 and 8. The $34,000 in prize money went unclaimed because no one caught any of the tagged walleye during the tournament — but a fisherman caught one this past weekend.

Quail doesn’t get the top prize available during the tournament, but he still gets a cut.

“He gets 20 percent of the extended contest proceeds, so we made him out a check for $2778 which will buy a lot of bail and lures,” Thee says, “whatever you need.”

According to the Iowa Department of Natural Resources, walleye are abundant in Iowa lakes and rivers, but difficult to catch. The walleye fishing season in Iowa runs from the first Saturday in May through February 14.