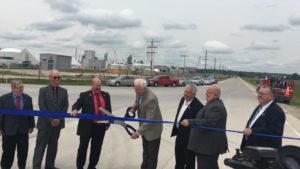 A ribbon-cutting was held in southeast Iowa today to mark completion of a roughly $10 million project for two roads that lead to the Iowa Fertilizer Company site near Wever.

The president of the Iowa Fertilizer Company issued a written statement, saying completion of the two road projects is “a clear demonstration of the tremendous progress being made” at the facility.

Once the plant is operating, it will produce up to two million metric tons of nitrogen fertilizer each year. Some of that fertilizer will be shipped out on rail cars, while the rest will be trucked out on the newly expanded roads around the plant.

The company paid for half of the new road construction and the rest was financed with a state grant from the Iowa Department of Transportation.

The company building the plant got about half a billion dollars in federal, state and local tax incentives. Critics say that’s far more than was needed to lure the plant to Iowa. Governor Branstad says the plant’s overall $1.9 billion price tag makes it the largest construction project in state history and he says it’s providing a boost to an area of the state with high levels of unemployment.