You are here: Home / Human Interest / City of Grinnell buying historic building for $890,000 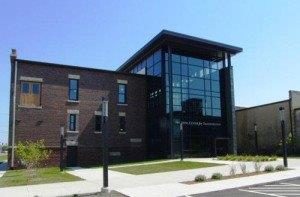 The City of Grinnell is buying a building that’s on the National Register of Historic Places and city offices may occupy part of the building.

Henry Spaulding started making horse-drawn carriages on the site in 1876. Fourteen years later his company was the largest carriage-maker west of the Mississippi. Earlier in this century, the building was renovated and reopened as the Iowa Transportation Museum, but it was re-possessed by an Iowa City bank last year for defaulting on a loan.

“MidWestOne made a really good faith effort to reduce that price to where it made sense for us to buy it,” says Grinnell City Manager Russ Behrens.

The bank originally wanted $1.4 million. The Grinnell City Council voted Monday night to buy the building for $890,000. The purchase is likely to be financed with the sale of a city-owned community center, with hopes that building will be converted into a boutique hotel.

State and federal grants were awarded for restoring the Spaulding Building as a museum. The city plans to maintain museum space in the building — to avoid having to repay $4.2 million in grants.

“More than likely one of the two main floors will be maintained as a museum or public meeting space kind of combination and then one level, if it were city offices, would be city offices,” Behrens says. “And the atrium could largely be used as it is for displays or a reception area.”

The process of converting the facility into a museum and conference center started in 2010, but the Iowa Transportation Museum was placed in foreclosure last summer.

Henry Spaulding once served as Grinnell’s mayor and was elected to the state senate in 1910. He was a trustee of Grinnell College and the first president of the Citizens National Bank of Grinnell when it was founded in 1904.