You are here: Home / Sports / Danker out as baseball coach at Upper Iowa 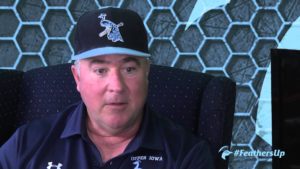 Danker spent 27 seasons with the Peacock baseball program, including the last 17 as head coach and compiled a record of 358 wins and 441 losses. The Peacocks finished this past season with an 18-29 overall record and finished 11th in the Northern Sun Conference with a record of 14-22.

“We want to thank Mark for all his efforts and dedication to Upper Iowa and the Peacock baseball program,” said Upper Iowa Athletic Director David Miller. “At this time, we believe the program needs to go in a new direction. We wish Mark nothing but the best in the future.”

Danker was named the NSIC Coach of the Year in 2007 after leading the Peacocks to a second place finish in the conference race.