You are here: Home / Human Interest / New milestone for the Iowa septuplets — diplomas! 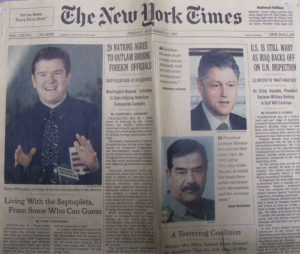 A young couple in a Des Moines suburb had one daughter but they wanted more children — and they got a lot more than they’d bargained for, including world fame.

Many Iowans will remember just where they were on November 19th of 1997, the day the Iowa septuplets were born. The parents, Bobbi and Kenny McCaughey of Carlisle, were global news.

Never before had seven live babies been born to an American mother.

The latest news flash is, the seven McCaughey kids are all now 18 years old and they’re all graduating this weekend from Carlisle High School.

After the remarkable births, many companies offered to help the family out with everything from diapers to a new 5,000-square-foot house. Among the offers, a free college education at Hannibal-LaGrange University.

Reports say five of the seven McCaugheys may eventually head to that Missouri institution, a sixth plans to head to community college while the seventh is joining the U.S. Army.