You are here: Home / Agriculture / Steady rains are making it tough to finish getting corn planted 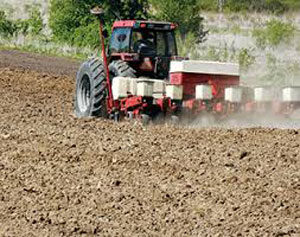 All of the recent rain is making it slow going for Iowa farmers who are trying to get their crops planted. Only two days were suitable for field work in the past week.

Statewide, about 88% of the corn crop is planted. That’s one day behind last year’s pace but four days ahead of the five-year average.

Iowa State University Extension agronomist Joel DeJong, based in LeMars, monitors nine northwest Iowa counties, which are trailing the rest of the state.

“You’ve got some neighborhoods that are pretty close to being done, probably 80% or so, on the corn planting,” DeJong says. “We’ve got other neighborhoods that have 30-to-40% of the corn in the ground, and then you get south of Sioux City in the Missouri River bottom, there’s a lot of areas there that have very few of the acres of corn planted at this stage of the game because of the rainfall we’ve had so far this spring.”

While much of the state has gotten a drenching in recent weeks, northwest Iowa is getting more than its usual share, frustrating many farmers.

“For the whole region, we’re probably about three-quarters planted on corn because we’ve got some very well-drained soils where we’ve got corn in the ground, but yet, I’ve talked with a lot of people who really don’t have that many acres planted yet because it’s been wet,” DeJong says. “Soybeans, probably only about ten-percent of the beans in the ground at this stage of the game whereas most people were done with both at this stage of the game last year.”

The latest USDA report shows less than half, or 43%, of the state’s intended soybean acreage is planted. That’s two days ahead of normal.