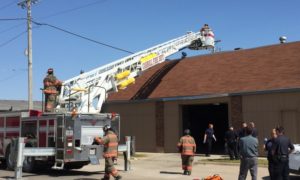 Firefighters in the western Iowa town of Carroll were sent on an odd rescue mission Wednesday.

The owners of a can and bottle redemption center reported to work just after 10 a.m. to find a person was stuck in the chimney in the building. After he was busted out by firefighters, 29 year old Jordan Kajewski claimed he’d been playing a game of hide-and-seek with someone.

Carroll Police Captain Mark Heino isn’t buying it. “He was arrested on a charge of trespassing,” Heino said. “It’s hard to imagine why he would be in there for anything other than a nefarious purpose.”

Carroll Fire Chief Greg Schreck says Kajewski was not injured, but he was trapped in the chimney for over 8 hours. “Employees at the redemption center heard him about 10:15. I think we were called at about 10:16 a.m.,” Schreck said.

“There was a small hole in the chimney where at one time probably a furnace or wood-burner attached and we could see his elbow and his face in there and were able to talk to him and he was conscious and cooperative. I’m sure he was relieved to get out.”

There was yet another shocking discovery when Kajewski was freed — he was naked. Heino hasn’t learned why Kajewski ditched his clothes. “I don’t know. Presumably, in an effort to make himself skinnier, though I’m really not sure…I just know when we extracted him, he was nude,” Heino said.

Schreck said Kajewski’s clothes were in the chimney. “I don’t know if he got hot while he was in there and he was able to get them off, but it was a fairly confined space for him, so not exactly sure how that happens,” Schreck said.

Heino has seen some odd things in his 38 years of police work. “Over the course of a long career, you run into some very strange situations from time to time, but yeah, this would rank up there with one of the more strange,” Heino said.