You are here: Home / News / Ernst says Trump camp has not contacted her about VP slot 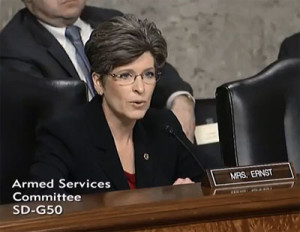 Senator Joni Ernst has credentials that check some of the boxes on Donald Trump’s list of qualities he’s seeking in a running mate.

Ernst is a combat veteran and she has experience in government at the county, state and federal level. So, if asked, would she agree to be Trump’s VP?

“That’s a hypothetical, of course, and I’m very focused on Iowa issues right now,” Ernst said Thursday evening during an interview. “No one from the campaign has reached out.”

Earlier this month, Governor Branstad indicated he was seeking a private meeting with Trump in order to tout Ernst as a running mate. Ernst has not met personally with Trump, but she’s talked with other members of congress who did meet Trump privately last week.

“A number of my colleagues stated that they really appreciated the fact that he was very thoughtful in his responses to them,” Ernst said. “He was very serious. He was very different in those meetings maybe than what you’ll see out on a stage somewhere, what you might see in Twitter.”

Ernst was first elected to the U.S. Senate in 2014. In January of 2015, shortly after taking the oath of office, Ernst was asked to deliver the Republican response to President Obama’s State of the Union Address. Ernst did not publicly endorse any of the presidential candidates before the 2016Iowa Caucuses, but a few months ago Ernst aired concerns about some of the comments Trump made on the campaign trail.

“I did have concern about his tone,” Ernst said. “…I don’t agree with every statement that Donald Trump has said, but I will tell you that there are other candidates as well that I would probably not agree 100 percent with their statements either. I would like to see as we move forward more talk about policy…Now that he is the presumptive nominee, I think he has that opportunity.”

Ernst made her comments during taping of the Iowa Press program that will air at 7:30 this evening on Iowa Public Television.