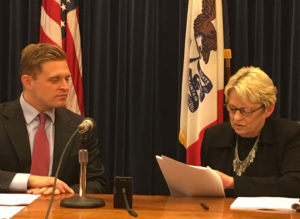 Governor Terry Branstad and his wife made more than $185,000 last year. Branstad’s $127,734 annual salary as governor accounts for about 70 percent of his income.

The rest came from the 69-year-old governor’s state pension, which amounted to nearly $49,000, plus some investments and his wife’s Social Security income.

“What’s clear from his tax returns once again this year is the governor’s commitment to giving,” he said. “He’s a very charitable person and gives much, much higher than average to charity overall.”

The governor and his wife donated nearly 19 percent of their income to charity. The Branstads also contributed nearly $19,000 to college savings accounts for their six grandchildren.

Branstad has released his tax returns every year he’s been governor and in 1982 and 2010 when he was running for governor.

“It’s part of his commitment to transparency,” Bousselot said, “and making sure…it’s clear where he’s earning money and what he’s doing.”

The governor’s chief of staff declined to comment on Republican presidential candidate Donald Trump’s refusal to release his tax returns.

Branstad and his wife, Chris, own 13 buildings in rural Iowa communities that are rented to the U.S. Postal Service. The couple made about $56,000 from Post Office rent last year.