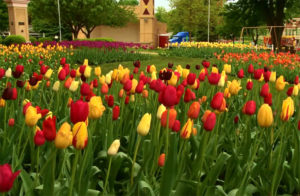 The annual Orange City Tulip Festival is underway in the northwest Iowa town and runs through Saturday.

“We do have some flowers that are pretty good yet along Central Avenue, Courthouse block and in Windmill Park we have some,” according to DeJong. “Some have reached their peak, but there’s still plenty to look at.”

The tulips are only part of the attraction — there’s also the traditional Dutch food favorites. “There’s always the famous puff-a-cheese, little Dutch pastries — looks like little mini pancakes made in rum butter sprinkled with powdered sugar. There’s the Dutch treats almond patties, bratwurst, lots of church stands. Plenty to eat, you will not go away hungry,” DeJong says. “And I always like remind people — anything you eat during the tulip festival outside is calorie-free.”

DeJong says the calorie-free claim has not been independently verified, but he believes the claim. He says he’s always amazed that the community of 6,000 pulls off the festival that can see some 100,000 visitors.

“Just amazing to see how many people come out and about in Dutch costumes,” DeJong says. He says it takes a lot of volunteers to do it and it is a community effort to celebrate the Dutch heritage. DeJong says the festival has not varied from its traditions through the years.

“I think overall it has stayed quite a bit like it has from years past.,” according to DeJong. “I have participated for many, many years, other than seeing crowds grow there are just so many things that are always the favorite — like the Pride of the Dutchman Marching Band marching in the wooden shoes. The street scrubbing is always something the people love… the friendliness of the community and so many things to do.”

You can find out more about the schedule of events at :www.octulipfestival.com