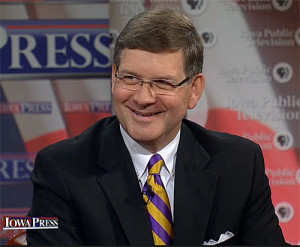 University of Northern Iowa President William Ruud surprised many people in the state this week when he announced he’s leaving Cedar Falls, after just three years, to take the president’s job at a small private college in Marietta, Ohio. “The opportunity to go to Marietta College is a great opportunity for me at this point in time in my career,” Ruud said. “The faculty and staff recruited me heavily.”

Ruud spoke about the decision Friday on the Iowa Public Radio program River to River. When he was interviewed to become the UNI president three years ago, the now 63-year-old Ruud suggested it would be his last job. That’s one reason some observers are baffled by his move to Ohio.

In addition, UNI has an enrollment of roughly 12,000, while Marietta College has just 1,200 students. Ruud says bigger doesn’t necessarily mean better. “I don’t think moving to Marietta is a less prestigious position. I think Marietta is a very prestigious college,” Ruud said. “I think folks just need to understand it’s a career opportunity for me and when everything was placed in front of me, I felt and my family felt it was a good decision for us to go to Marietta.”

Ruud insists his departure has nothing to do with the Iowa Board of Regents not voting on an extension of his contract at UNI. It expires on June 1. “There were discussions six to eight months ago about the possibility of an extended contract, but the contract had nothing to do with it,” Ruud said. “I’m leaving a piece of my heart at UNI. I cut it out and left it here. I’ve made a lot of friends and we’ve had a lot of successes.”

Ruud worked at nine other universities before landing at UNI. He’s also an Army veteran and he did a three-year stint on the staff for Idaho’s governor. Ruud also spent a dozen years at another Ohio institution, the University of Toledo.

The Board of Regents will name an interim president for UNI in June.