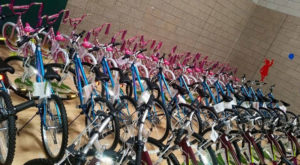 About 70 central Iowa children will be given their first bicycles in a special event this afternoon at a Des Moines elementary school.

It’s the first of many planned bike give-aways this spring and summer that will be held across the state by Variety – The Children’s Charity of Iowa. Tiffany Luing, Variety’s activities director, says they worked with schools to identify kids between the ages of five and 12 who’ve never had their own bike.

“We give out a helmet and a lock, then they go to find their bike,” Luing says. “We also have them sit down with a police officer and go over safety and then also promise to lock up their bike and to ride it safely.” Through Variety’s Bikes for Kids program, more than 12-hundred bikes, helmets and locks were given to Iowa children last year. 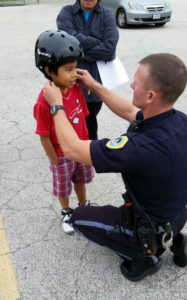 A police officer helps a young biker adjust his helmet.

“It’s a great way for Variety to get our mission out there,” Luing says. “We want kids to be healthy and active and we also think that riding a bike is a really important staple for children.” Once the potential recipients are identified, each child has to fill out an application which includes an area where they can write a paragraph or draw a picture explaining why they’d like a bike.

“A lot of kids will say, ‘I want to ride a bike because my mom works two jobs and she can’t afford a bike and my little sister is sick so all our money goes toward her medication,’ so, there’s some really touching stories,” Luing says. “There’s also some very cute pictures. For example, I had one where all the other kids were riding bikes and there was one little kid in the corner, crying, and that was the one that wanted to win a bike.”

The bikes are chosen for each child based on their size and gender in pinks, blues and other bright colors in 20-, 24- and 26-inch models.

Each prize package of the bike, lock and helmet costs about $100 so this 70-bike event is costing around $7,000, which is being underwritten by John Deere Financial. The event is at 4 p.m. at Findley Elementary in Des Moines.