You are here: Home / News / Western Iowa getting more rain that the rest of the state 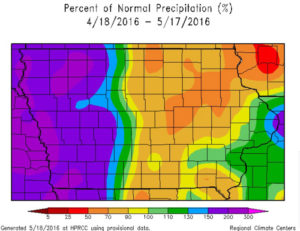 A color-coded rainfall map of Iowa shows the western third of the state in deep purple hues while most of eastern Iowa is multiple shades lighter, in yellow and orange.

Jeff Zogg, a hydrologist at the National Weather Service, says parts of water-logged western Iowa have seen 200 percent more rain than average since mid-April, while areas in the much-drier east are only at 50 percent.

While parts of southwest Wisconsin are experiencing near-drought conditions, Zogg does not think that’s likely here. “At this point, we’re not expecting drought conditions to materialize across the eastern part of the state,” Zogg says. “We’ve had some persistent wet weather across the western part of the state but we’re seeing an evolution in the weather pattern, especially for the next month or so. It looks like wet weather will be overspreading more of the state. The wetness won’t be confined just to western Iowa.”

Compared to last week, the week ahead is expected to bring big changes in the forecast with warmer temperatures and the likelihood for multiple showers and the potential for heavy rain and severe weather.