You are here: Home / News / Branstad says it’s up to Trump to decide if, when to release personal tax returns 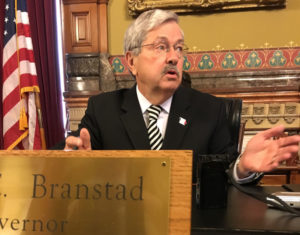 Republican Governor Terry Branstad criticized the Democrat he faced in his 2014 reelection bid for failing to release more of his personal income tax returns, but Branstad isn’t calling on Republican presidential candidate Donald Trump to release his tax records.

“Jack Hatch released one year and we thought that was kind of a stunt because you obviously can manipulate those kind of things,” Branstad told reporters this morning, “but, you know, each situation is different.”

Hatch — Branstad’s last opponent — is a real estate developer like Trump. Branstad, who released his own state and federal income tax returns last week, has a long history of calling on his opponents to release their tax returns, but Branstad says this time, it’s up to Trump to decide if and when to release his.

“I’ve done mine, you know, forever, but that’s a decision that I’ve made and each individual needs to make their own decision,” Branstad said today. “I don’t know that, well, I guess it’s up to the public to decide.”

Branstad first released his personal tax records to the public during his first campaign for governor in 1982 when he faced Democrat Roxanne Conlin. Conlin’s husband is also a real estate developer and Conlin revealed she and her husband had a net worth of more than $2.2 million, but paid no state income taxes in 1981 due to tax shelters. Branstad, at the time, criticized Conlin for using tax schemes she criticized on the campaign trail. Last week The Washington Post reported Trump had not paid any federal taxes for at least two years in the late 1970s — because Trump used the same tax schemes Branstad criticized the Conlins for using.

“Anybody that’s in real estate, I think, probably does that,” Branstad said today. “…It’s legal. I don’t think it’s right. I think that’s one of the things in the tax code that needs to be changed.”

In 2012, Trump criticized Mitt Romney for failing to release his personal tax records — something Romney did later that summer. In January of this year, Trump said he was nearly ready to release his tax returns, but has since declared he will not. Branstad says this is just one of “many, many issues” voters will have to consider.

And Branstad has been urging his fellow Republicans to unite behind Trump’s bid for the White House. Branstad is back at work in the statehouse today after taking a sick day yesterday to recover from what he described as a “bad cold.”