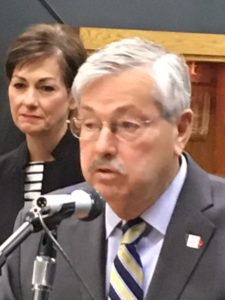 Governor Terry Branstad says he hopes some other Iowa city is able to land a new Prestage Farms pork plant after Mason City took itself out of the running.

“I think they made a mistake,” Branstad told reporters today after an unrelated event in his statehouse office. “…First of all, Iowa is a leading pork producing state. It makes sense to process those pigs in Iowa.”

The Mason City Council cast a tie vote on a development deal with the company in early May, rejecting the proposed $240 million pork processing plant. Branstad said he “was impressed” with Prestage when he met with the company’s executives.

Critics raised environmental concerns about wastewater from the proposed plant and the odor from hog confinements that likely would be built or expanded to supply the plant. Others cited extra costs for the Mason City community, including the hiring of new school staff to teach the children of plant employees who do not speak English.

The CEO of Prestage said recently that as the company examines other locations, he’ll be better prepared to deal with critics of the project, who he calls “kooks”.

“What I’m concerned about is South Dakota and other states would like to have them,” Branstad told reporters today. “We hope that we could get this in Iowa because I think it would be good for the Iowa independent pork producers and good for the Iowa economy.”

Prestage Farms officials say “dozens” of cities in Iowa and elsewhere have expressed interest in their project. The Prestage Farms CEO said he’s open to building anywhere in the upper Midwest, but Iowa is still his “preference.”

Mason City officials initially offered a more than $11 million package of local incentives to land the deal. A petition drive is underway in the community to try to get the city council to reverse its rejection of the project. Iowa Citizens for Community Improvement led the lobbying effort against the deal and the group vows to organize in other Iowa cities.