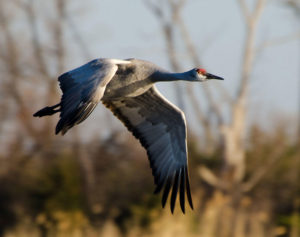 An annual census of sandhill cranes in Iowa finds the bird’s population is continuing to expand in a state where they haven’t been plentiful in more than a century.

Volunteer spotters counted a record 19 cranes during a recent event at Chichaqua Bottoms Greenbelt, a vast wildlife and recreation area in Polk County, some 20 miles from Des Moines.

Chichaqua is just what the cranes need, according to Doug Sheeley with Polk County Conservation. “They won’t come back to a hundred acres, or 200 acres or 500 acres,” Sheeley says. “They need large expanses of area to come back to, so if you’re going to get those kinds of charismatic wildlife species coming back, you need big areas.”

Few Iowans have seen the tall, gangly birds which are often confused with herons. Plentiful in Nebraska and Wisconsin, the cranes abandoned Iowa in the late 1890s because of over-hunting and loss of habitat. Since its meager beginning in 1960, Chichaqua has grown to more than 8,000 acres.

Pat Phelan grew up here and his family sold 1,300 acres for restoration of the wetlands. Phelan notes, it’s now a destination for school kids on field trips. Phelan says, “To come out here and see it and get muddy and get wet and get dirty, but they really see what nature is like and what this was like when the pioneers first came over here.”

Sandhill Cranes have been reproducing in northern and eastern Iowa for decades. Bremer County volunteers counted 63 cranes last month. Now, they are on the outskirts of Des Moines, and Pat Schlarbaum at the Department of Natural Resources is thrilled Iowa’s flock is growing.

Schlarbaum says, “They spin their magic, these wetlands are our heritage and they were a long time gone, 98 years gone, and now that they’ve returned, let’s keep ‘em with us this time.” The crane count this spring is promising, but the experts say it’s imprecise. Autumn provides a better assessment, as young colts become more active, when conservationists can verify that sandhill cranes are not just visiting Iowa, but raising families as well.