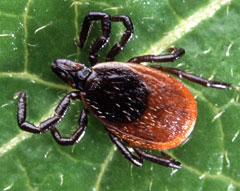 Doctor Patricia Quinlisk, with the Iowa Department of Public Health, says there are a wide variety of ticks in the state and they’re all potentially dangerous.

Some suggestions for preventing tick bites include; avoid wooded and grassy areas, wear long-sleeved shirts and pants tucked into socks or boots, and use insect repellents that contain DEET.

Even though it takes a day or so for the attached ticks to inject the bacteria, checking yourself over immediately after being outdoors is also important. “Make sure, if there are any ticks on you, you get them off immediately,” Quinlisk says. “And remember, some of these ticks may not be bigger than the period at the end of a sentence.”

to Quinlisk, rather than using folk remedies. “The best thing to do is to grab the tick as close to the body as you can with something like tweezers,” Quinlisk explains. “Don’t squeeze the body, because you don’t want it to regurgitate that stuff into you, but grab the tick as close to the skin as you can and then pull the tick straight out.” Quinlisk notes ticks tend to prefer the back of the knee, armpit, scalp, groin, and back of the neck.