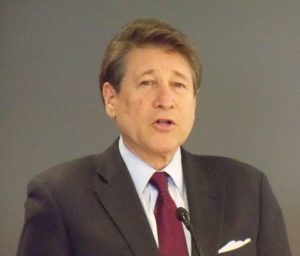 A drug treatment provider in central Iowa has filed a federal lawsuit against Wellmark Blue Cross and Blue Shield, alleging the insurance provider owes them millions of dollars in unpaid claims.

St. Gregory Retreat Centers CEO, Mike Vasquez spoke about the lawsuit this morning. “We filed suit today in federal court today against Wellmark Blue Cross/Blue Shield for multiple counts of fraud and breech of contract. Our lawsuit also accuses specific Wellmark individuals of engaging in a patter of behavior of denying and delaying claim payments for services that have already been preapproved,” Vasquez says.

Vasquez says Wellmark announced it was lowering the amount it would pay for services and then withheld payments that had been approved to make up the difference. “It’s almost unbelievable when you think about it. What Wellmark has done is delayed and denied services that they had previously approved — and in some case as many as five and six times during a patient’s stay,” according to Vasquez.

He says St. Gregory provides treatment services to those suffering from drug and alcohol dependence that are key to the people turning their lives around. “Most of the patients are from central Iowa, and there are a percentage of patients — less than 20 percent — that are from the outer part of the state of Iowa. And several that are from outside of Iowa.

Vasquez says they are seeking to recover the payment of 12 million dollars for the treatment provided after trying to settle the issue with Wellmark. “From an aspect of trying to sit down and negotiate a settlement multiple times in person and multiple times in an effort to get together to no avail,” Vasquez says. “We have made offers to them through other efforts…but we were left with no alternative but to file a lawsuit to be able to have an opportunity to get them to recognize the impact they’ve put both on Wellmark and on Iowans.”

Wellmark spokesperson Traci McBee issued this statement on the lawsuit:

Wellmark has been involved in a dispute with St. Gregory’s regarding its billing practices. We attempted to resolve the matter directly with St. Gregory Retreat Center. Those efforts to date have been unsuccessful. We will be reviewing the lawsuit and will respond appropriately with court filings that state Wellmark’s position on the matter.

On behalf of our customers, we have an obligation to monitor the practices of network providers and to take action when repeated problems are not corrected. On February 18, 2016, Wellmark Blue Cross and Blue Shield notified St. Gregory Retreat Center of our intent to terminate their provider agreement for inaccurate billing practices effective June 30, 2016.