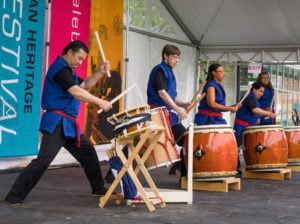 A popular event opens today in central Iowa where visitors can see everything from Polynesian dancing and a Samoan fire show to demonstrations in the martial art of Eagle Claw Kung Fu.

Nu Huynh, executive director of the Iowa Asian Alliance, says this is the 14th annual CelebrAsian festival, which drew 60,000 visitors over its two-day run last year.

“CelebrAsian in Iowa allows you to immerse yourself in the sounds, sights and tastes of Asia without having to leave Iowa,” Huynh says. “No need for a passport!”

Huynh says, “Come downtown to the Western Gateway Park area and experience 13 different Asian villages where they feature the food, culture, education, crafts and gifts that’s indigenous to their particular culture.” One new feature this year is a “cosplay” costume contest, which Huynh says has its roots in the fanatical devotion to Japanese anime.

“That competition is happening on Saturday,” Huynh says. “Folks can still enter up until the day of the festival. They can put on their favorite character and go all out. There is an adult and youth category for both groups and individuals.” The free festival runs today from 11 a.m. to 9 p.m. and Saturday from 11 a.m. to 11 p.m.