You are here: Home / Business / Sheldon machine company ready for another expansion 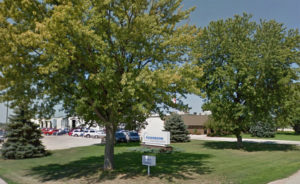 An Iowa company plans to expand with a 46,000 square feet addition to its Sheldon headquarters.

“At the heart of the expansion we have a project that we’ve been working with one of our larger customers — Oskosh truck — for about eight years, with is on the JLTV. The Joint Light Tactical Vehicle — which is the Army’s replacement for the Humvee,” Rosenboom says.

The company makes a high-pressure gas spring and gas pump that goes with the suspension of the vehicle. He says the contract will give them work for some time. He says the initial contract is for eight years and 17,000 vehicles. But he says the military needs to replace more than 50,000 vehicles and the overall fleet is a quarter million.

The company’s products have been used in several industries including: agriculture, construction,material handling, refuse and waste handling, utilities, commercial, transportation and mining. Rosenboom says the jobs are the STEM type of jobs that have been talked about a lot recently.

“They’re medium to high-skilled jobs, they’re computer numerical-controlled machinging equipment, robotics, automated assembly equipment and full production line type of stuff,” Roseboom says. “They are not low-skilled jobs, that’s for sure. The require some computer programming and skills with equipment, machines, that kind of thing.” The jobs will pay just under $41,000 a year.

Rosenboom says they want to begin the expansion within the next month or two and will add the 54 jobs over three years. It’s another step forward for the family-owned operation that now has around 260 employees. “Rosenboom was establish in 1974 by my parents — Larry and Viv Rosenboom. It was a small tool and die company, but it has grown in the last 40 years,” according to Rosenboom. “This headquarters, this will be our eighth expansion of the headquarters. We have two additional facilities, one in Spirit Lake, Iowa and one in Bowling Green, Ohio.”

Rosenboom credits a good Iowa work ethic from the company’s employees for their continued success that has led to the latest expansion. “When my parents started this company, I am sure they couldn’t have imagined where it has gotten to today,” Rosenboom says, “but we’ve been blessed with a lot of good people who have helped us along the way.” The company is investing $16 million into the expansion. The city of Sheldon awarded the company a five-year tax rebate, and the state also approved tax benefits.