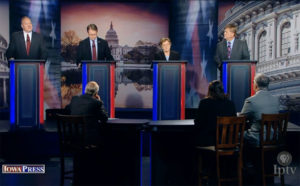 The four candidates competing to be the Iowa Democratic Party’s nominee for the U.S. Senate are offering different views on how best to resolve water quality concerns.

The four Democrats appeared on Iowa Public TV for an hour last night in the only statewide forum that will be televised before the June 7 Primary.

They were asked about the Des Moines Water Works lawsuit challenging how farm chemical run-off is handled in three northwest Iowa counties.

“That’s the way to go,” Judge said. “…And I was very disappointed that that did not pass the Iowa Legislature this year.”

“The taxpayers of Iowa should not have sales tax raised to bribe the polluters,” Fiegen said.

Fiegen said U.S. farmers shouldn’t get federal payments if their farm chemicals are polluting waterways nearby.

“I’m the only person in this race who has united farmers, environmentalists, business leaders and cities to work together,” Hogg said.

“Tie the Clean Water requirements that we need to the right to get federal crop insurance,” Krause suggested.

All the candidates agree the federal minimum wage should be raised and they believe the federal government should make marijuana legal for medical use in all 50 states. Hogg and Judge had an extended conversation about a 2008 bill in the state legislature that unions supported — a bill Democratic Governor Chet Culver vetoed.

“I supported the expansion of collective bargaining rights. I know that the legislators offered Governor Culver and Lieutenant Governor Judge whatever changes we needed to make in that bill to make it acceptable and I know that that offer was refused,” Hogg said.

Judge responded: “I think Senator Hogg may not be well informed. I do not believe that there was a lot of back-and-forth and negotiation on that particular piece of legislation.”

The candidate who wins this Democratic Primary will face Republican incumbent Chuck Grassley in the November election. Krause and Fiegen tried but lost bids to challenge Grassley six years ago. Hogg said during last night’s forum that voters are “desperately looking for new leaders.”

“We do not want to have the 2016 US Senate election be a re-run of the 2010 gubernatorial election,” Hogg said. “That would be very bad for Democrats.”

That was a reference to Judge’s last appearance on a statewide ticket, back in 2010 when she as lieutenant governor sought reelection with then-Governor Chet Culver. Judge also rejected the idea being recruited to run by U.S. Senate leaders makes her the “establishment” choice. She pinned that label on Grassley.

“Anyone that has served in the United States Senate for 36 years, served in congress before that, really spent most of his working life in Washington, D.C. is, in fact, the establishment candidate,” Judge said.