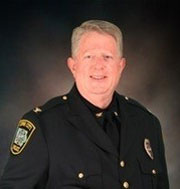 The incoming executive director of the Iowa Police Chiefs Association is open to changes in the state’s marijuana laws.

However, Sam Hargadine says his group won’t be backing or fighting any plans that would clear the way for the use of marijuana as medicine in the state. “We decided to leave that to the medical experts,” Hargadine said. “We certainly recognize that there are some illnesses and conditions that marijuana may be resource for them…but we’ve stayed out of that.”

The 57-year-old Hargadine has been the police chief in Iowa City for nearly 11 years. He’ll be leaving that job at the end of June to become the Iowa Police Chiefs Association’s first paid executive director.

He’s suggesting state law be changed so possession of marijuana would be reduced from a serious to a simple misdemeanor. It would mean people arrested for possession of pot would receive a ticket on sight, rather than be transported to jail, fingerprinted, and then released.

“It’s one of those things that, depending on where you go throughout the state, not everybody agrees on that,” Hargadine said. “When you’re debating whether to legalize it (marijuana for recreational use), I think we’re all in agreement that would be a mistake. However, it should be lowered from a serious misdemeanor down to a simple.”

The Iowa Police Chiefs Association just recently presented Hargadine with its “Police Chief of the Year” award. He’s a native of Columbia, Missouri.