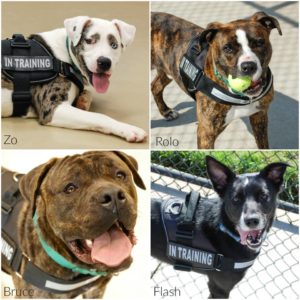 Four dogs from the Animal Rescue League (ARL) of Iowa are living with prison inmates at the Clarinda Correctional Facility as part of a program that will ultimately benefit veterans.

The program was launched on May 11 and involves inmates who train the dogs, so they can eventually become well-mannered pets for veterans. The ARL’s Mick McAuliffe says the dogs will live with the offenders, in their cell, for six weeks.

“It’s to get these dogs more adoptable…to sit calmly. Our end goal, we’d like to pair these dogs up with…veterans in need. These aren’t service dogs. They are purely trained shelter dogs for companionship and comfort,” McAuliffe says. Eight prisoners were selected for the program — four are primary handlers and four are backup handlers.

McAuliffe says the dogs are not aggressive, but do need some intense training. “These guys are rough and rowdy,” McAuliffe says. “They’re jumping, pushy, they may mouth you when playing, and they pull extremely hard on leash.”

McAuliffe says the ARL has seen the benefit of having offenders work with animals through previous partnerships with the Iowa Correctional Institution for Women in Mitchellville and the North Central Correctional Facility in Rockwell City.

The program is funded entirely by private donations.