You are here: Home / Education / Board of Regents releases tuition increase proposal 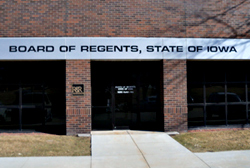 The Board of Regents office has released details on a proposed tuition increase.

The board is looking at a tuition increase after the Iowa Legislature approved around $6 million in funding after the board requested a little more than $20 million.

The regents are proposing an increase in tuition by $300 for each of the three state schools for instate undergrad students. That increase would put tuition at $7,178 dollars for the 2016-17 school year at Iowa State University, the University of Iowa. Tuition at the University of Northern Iowa would be $30 less.

The board is also being asked to consider increases for undergraduate nonresidents, as well as graduate and professional students, with amounts varying depending on the institution.

The Board of Regents will discuss the issue at their meeting next week in Ames.