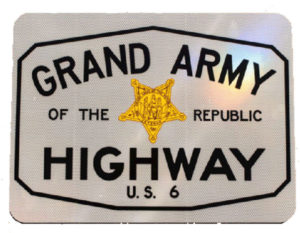 The group Sons of Union Veterans of the Civil War is working on a long-term way to remember soldiers who served in the Union Army.

Highway 6, which runs from Council Bluffs to Davenport was named the Grand Army of the Republic Highway in 1947, but many of the road signs proclaiming the highway’s name have vanished. Dan Rittel is leading the campaign to get support from small towns along the highway to put up new signs

“It’s overwhelmingly positive. I haven’t had any negative reaction yet. Most of these towns are eager, I think they see it as a way to honor their local veterans as well as veterans at large,” according to Rittel. When the project is finished, motorist along the route will see signs featuring a gold star, will designate Highway-6 as the “Grand Army of the Republic Highway.”

“It’s not really kind of in the forefront any more. It’s basically just honoring these veterans and the work that they did after the Civil War,” Rittel says. There will be nearly 60 signs, so travelers through places like Anita, Brooklyn and Wilton, will know they are driving down the Grand Army of the Republic Highway.