You are here: Home / Fires/Accidents/Disasters / Thousands of hogs die in weekend fire 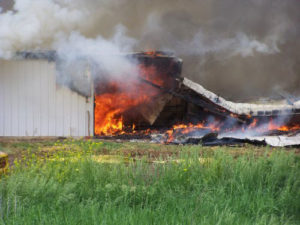 This fire in Hawarden killed 5,000 hogs.

Five-thousand pigs died when fire swept through a hog confinement in northwest Iowa Saturday morning. It happened in Sioux County, near Hawarden.

Hawarden Fire Chief John Strong describes the scene when his crew arrived. “One end was fully engulfed,” Strong says. “I don’t know what was in it. All’s we know was we got called to a hog confinement fire.”

Firefighters from seven other communities in Iowa and two from South Dakota were on the scene for much of Saturday.

Two large confinement buildings were a total loss. Investigators believe a pig dislodged a heating lamp. It fell on straw and ignited the fire.