You are here: Home / Military / Trump lists vets groups getting money from January fundraiser in Iowa 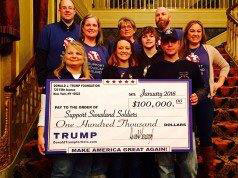 Support for Siouxland Soldiers received a check on January 31 from Donald Trump’s fundraiser.

Republican presidential candidate Donald Trump today said he raised $5.6 million for veterans at an event in Iowa just before the Caucuses.

“If we could, I wanted to keep it private because I don’t think it’s anybody’s business if I want to send money to the vets,” Trump said.

Trump is blasting the media for questioning how much was raised and where the money went.

“Probably libelous stories or certainly close in the newspapers and the people know the stories are false. I’m going to continue to attack the press,” Trump said. “Look, I find the press to be extremely dishonest.”

Trump held a news conference this morning in New York City where he read a list of all the organizations that had received donations from the Des Moines fundraiser. Trump said Americans for Independent Living in Waterloo, the Puppy Jake Foundation in Urbandale, Support for Siouxland Soldiers and Central Iowa Shelter and Services each got $100,000 checks. A fourth donation of $100,000 is planned to Projects for Patriots in Sioux City, but won’t be released until a review of the group’s filings for non-profit status is completed. 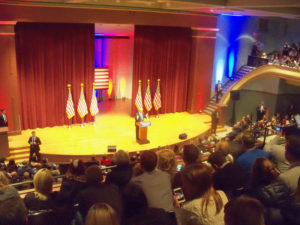 Donald Trump during his Drake fundraiser in January.

“This money was raised during a little speech that I made rather than doing a debate — the one debate I missed,” Trump said. “It was the lowest rated debate, by the way, but I won’t say that.”

Trump held an event at Drake University January 28 rather than participate in a FOX News debate with the other GOP candidates. Trump told reporters today his staff and some volunteers went through financial records to ensure the contributions were going to legitimate groups.

“I don’t want the credit for it, but I shouldn’t be lambasted and remember this: so out of the almost $6 million that was raised, not one penny did I take for administration costs,” Trump said. “That’s unheard of.”

Trump’s January 28 event was held on the Drake University campus in an auditorium with 700 seats. Hundreds who couldn’t get in the packed venue stood outside and watched the event on big-screen TVs.

“We just cracked $6 million. Right? Six million,” Trump said near the end of the event and the crowd cheered. “And we have outside a list of the organizations and folks that are going to be getting this money. We’re going to divide it up.”

Trump said today some pledges didn’t come through and that’s why his final list of donations is short of that $6 million dollar. Trump told reporters he’s “never received such bad publicity for doing such a good job.”

The Washington Post reported the $1 million donation Trump announced he was making in January wasn’t made to the Marine Corps-Law Enforcement Foundation until last week.