You are here: Home / Sports / Dwight and Tippett on Hall of Fame ballot 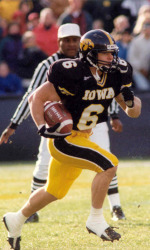 Former Iowa standouts Tim Dwight and Andre Tippett are on the ballot for the next class of the College Football Hall of Fame.

Dwight was a two-time first team All-American as a kick returner and wide receiver and finished seventh in the Heisman Trophy voting in 1997.

Tippett was a first team All-American defensive end in 1981 and led the Hawkeyes to a share of the Big Ten championship and their first Rose Bowl berth since 1959.

They are two of 75 players and six coaches on the ballot from the Football Bowl Subdivision. The announcement of the 2017 class will be made on January 6 in Tampa, Florida, as part of championship weekend for the College Football Playoff.