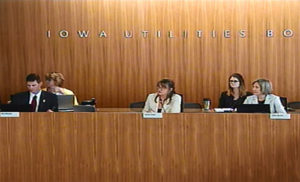 The Iowa Utilities board today asked their attorney to draw up an order that will allow Dakota Access to begin construction on the Bakken oil pipeline in areas not under the jurisdiction of the U.S. Army Corps of Engineers.

The Corps is still working on the approvals for the pipeline to cross waterways and sensitive areas under their jurisdiction.

The board’s request came after a discussion of how the action might impact the March 10th order that gave approval for a construction permit. Attorney David Lynch told the board Dakota Access wants to being construction only in areas where they have the proper permits and authorization, which prompted a question from board chair Geri Huser.

“And you do not believe that is a change from our March 10th order?,” she asked. “Depending on how the board handles it, no I do not,” Lynch says.

Board member Nick Wagner says they have already given approval for Dakota Access to remove trees in the areas where they have approval and this is similar.”I think following that, we would be in the same realm to say they could begin construction in areas for which they had all necessary approvals, permits and easements,” Wagner says.

Board member Libby Jacobs agreed. “I would concur that if there are parcels where all permissions have been granted, they have voluntary easements, the permits form the other governmental entities are in hand, then I think it fits the spirit of the March 10th order,” Jacobs says.

Lynch told the board that all but three of the 65 permits for the areas under the Corps jurisdiction are expected to be completed by June 16th, so there would not be a big gap in the time allowing construction to start and when the permits were issued. Jacobs expressed concern again about the impact of allowing the construction.

She says she has issues with the board retaining jurisdiction and asked that a brief be prepared for the order with language that says the board would retain jurisdiction. Lynch says the brief can be prepared by the end of the week and the board members could then approve it.