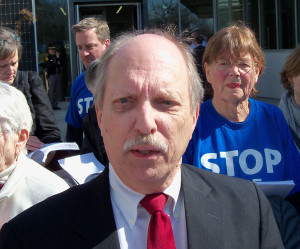 An attorney for the Iowa Chapter of Sierra Club says the Iowa Utilities Board should not allow Dakota Access to start building the Bakken oil pipeline in Iowa.

The Sierra Club is filing a petition for Judicial Review in Polk County District Court challenging the decision to grant a construction permit for the pipeline.

Attorney Wally Taylor is not sure what will happen next after the IUB indicated Wednesday it was moving toward allowing Dakota Access to begin construction in areas where it has obtained the proper permits.

“I am not quite sure what legal action we will take at this point until we see the written order — which I guess is supposed to come next week. But certainly, the board is wrong if they allow construction,” Taylor says.

IUB members asked their legal counsel to draw up an order that would allow construction to begin in areas not under the jurisdiction of the U.S. Army Corps of Engineers while the Corps continues work on approving permits.

Taylor says allowing construction goes against the guidelines the IUB issued for the permit.”The March 10th order authorizing the permit was very clear that no construction anywhere on the pipeline in Iowa could commence until Dakota Access had all of its authorizations, including the Corps authorization,” Taylor says.

He says the chair of the IUB correctly raised concerns Wednesday that allowing construction to start would take away the board’s control over the project. “I think it’s clearly a modification of the order and the board has not jurisdiction any more. The case is in the district court,” according to Taylor.

The Sierra Club’s request that the permit approval be reconsidered was turned down, and that is why the organization is now filing the petition for a review of the decision. He says they are raising several issues about how the process for awarding the construction permit.

“They didn’t give any credence to the impact on climate change. They didn’t require Dakota Access to ensure that environmental protections had been undertaken along the entire route,” according to Taylor. He says they also have a concern with the regulators allowing Dakota Access to get access when property owners don’t want to voluntarily allow it.

“We think that the board should not have granted eminent domain authority for a number of reasons,” Taylor says, “one is that Dakota Access is not a utility, it is a common carrier.” Dakota Access plans call for the pipeline to cross 18 Iowa counties, carrying crude oil from the Bakken oil fields in North Dakota to Illinois where it will link with another pipeline.

The order allowing Dakota Access to begin construction could be voted on by the IUB next week.