You are here: Home / News / Group celebrates plans to complete all four lanes of Highway 20 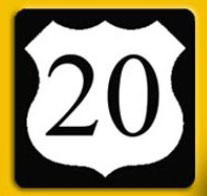 After decades of planning and construction, the final pieces are being assembled to make Highway 20 a four-lane thoroughfare all the way across Iowa, from Sioux City to Dubuque.

The U.S. 20 Corridor Association is celebrating by unveiling a list of honorees and “heroes” of the project. Association president Shirley Phillips says the 85 people played a role in the development and construction of the key highway.

“This wasn’t a one-person mission, it took a whole village to get this project done,” Phillips says. “We want to make sure that everybody was at least acknowledged.” Phillips says it’s been a very long journey, but the border-to-border four-lane highway is nearly finished.

“We can’t wait until the end,” she says. “It’s supposed to be completed by the end of 2018 and they are moving on almost every mile of the gap right now with some type of construction, either surveying, moving utilities or dirt work.”

The first miles of four-lane U.S. 20 in Iowa were built in Woodbury County and opened in 1958. Since then, individuals, organizations, businesses and legislators have pushed for completion of the statewide four-lane road.