You are here: Home / Agriculture / Prestage taking Mason City out of consideration for pork plant 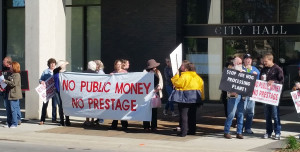 A North Carolina company says it’s no longer considering Mason City as a site for a proposed pork processing plant.

In a statement released Thursday night, Prestage Foods says they wish to withdraw from any future consideration of a proposed $240 million pork processing facility in Mason City.

They say while they appreciate the outpouring of support and efforts made on their behalf to secure support for the project, it’s their belief that additional efforts are counter-productive to their company as well as Mason City.

The statement goes on to say it’s clear to the company that the project exposed deep divisions among the citizens of Mason City. The statement says the company is grateful for the local leaders and everyday citizens who offered their support, while at the same time they admit they did not adequately address a misinformation campaign that their opponents effectively used to influence public opinion.

The company says they are continuing to evaluate alternate sites for the plant inside and outside of Iowa and their belief remains the plant is needed for the pork industry.