You are here: Home / Crime / Courts / Branstad: Trump’s remarks about judges not smart, but he’s not a racist 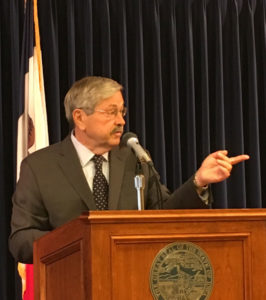 Republican Governor Terry Branstad today said he disagrees with Donald Trump’s assertion that judges who are Muslim or of “Mexican heritage” cannot rule fairly on lawsuits filed against him, but Branstad’s not calling it a mistake.

“I think it’s not smart to comment on any judge, especially a judge that’s going to handle your case,” Branstad said. “It certainly goes against conventional wisdom, but then again, he’s gone against a lot of conventional wisdom.”

Trump has been critical of an Indiana judge who’s handling a lawsuit against Trump University. This weekend, Trump said a Muslim judge would likely be too biased against him, too, because Trump has called for a temporary ban to letting Muslims in the country. Former House Speaker Newt Gingrich — rumored to be on Trump’s list of potential running mates — has called the remarks “inexcusable.” Branstad was asked about Trump’s comments today during his weekly statehouse news conference. Branstad told reporters he doesn’t think the comments were “appropriate,” but Branstad’s not suggesting Trump is a racist.

“Most people that know Donald Trump know that he’s not a racist,” Branstad said, “and that he’s had tremendous relationships with minorities and he has a lot of minorities and women that have been in key positions in his business.”

Nor is Branstad suggesting Trump apologize.

“I’m not going to get into that. I mean, I guess my feeling is we should be focusing on the substance of the issues,” Branstad said. “I understand it’s 24/7 media and media just loves to focus on this stuff, but I’m interested in the direction this country’s going.”

In addition, Branstad is pointing to a report indicating Trump has won the vast majority of lawsuits that have been filed against him over the years.

“Mr. Trump has been quite successful in the court of law, I will give him credit for that. He’s had a lot of lawsuits and I looked at the USA Today article and he’s won about 11 for every one he’s lost. That’s a pretty good track record,” Branstad said, laughing. “Just about any lawyer or an individual would be pretty happy to have that kind of a record.”

Branstad is a graduate of the Drake University Law School who practiced law in the 1970s. Branstad has let law license lapsed as he’s served as governor.