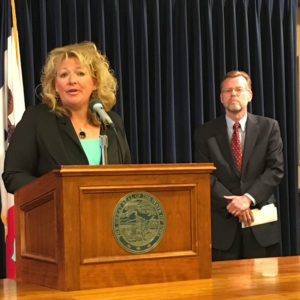 The Director of the Iowa Department of Public Health says less than one dozen cases of the Zika virus have been confirmed in the state.

Gerd Clabaugh gave an update today at the Governor’s weekly news conference. “Of the nearly 200 Iowans who have been test for Zika — only seven case have been identified. And all of these cases tested and confirmed are individuals who have traveled to other countries where transmission is ongoing,” Clabaugh says.

He says you should be aware of the potential to become infected with Zika if you go to one of the countries where the disease is active. “The Caribbean, Mexico, South America and Central America,” Clabaugh says. “And it’s especially important for pregnant women who are traveling to those areas to reconsider their plans or at least take precautions relative to the work that they are doing when traveling in those areas.”

Zika can cause birth defects in the babies of women who are infected which leads to the babies having an abnormally small head. Depute State Epidemiologist Ann Garvey says there have been no problems reported in the women who tested positive here.

“Of the Iowans who have been infected, there were four females and three males. None of those females were pregnant. They have all since recovered…,” Garvey says.” We have not had any pregnant Iowans infected with this virus that we are aware of.”

Doctor Garvey says the mosquitoes which carry Zika are not native to Iowa and the chance of becoming infected here through a mosquito bite is extremely low. “The real mosquito risk in Iowa this summer is West Nile Virus. Iowans are infected with this virus every year,” according to Garvey. “And Iowans need to be taking measures to protect themselves — like wearing insect repellent containing DEET. This is especially important during those peak mosquito hours, which is from dusk till dawn.”

Since 2005, Iowa has had between five and 44 reported cases of West Nile Virus each year. Other ways to protect yourself against all mosquito bites along with wearing repellent include: Wear long sleeves and long pants when possible when outdoors; patch up screens to protect your home from mosquitoes; get rid of standing water to eliminate breeding grounds.

For more information about Zika or West Nile virus, go to the Iowa Department of Public Health’s website.