Critics of the Iowa Utilities Board decision giving developers of a crude oil pipeline permission to start construction in Iowa say it’s a “small set-back” and there are “other ways” to stop the project.

A few dozen protesters rallied early this afternoon near the state capitol. They’re hoping federal officials refuse to grant river crossings for the pipeline, plus pending lawsuits seek to block construction, but these opponents also vow to engage in “civil disobedience” as a last resort.

Kathy Holdefer of Mingo plans to be part of the “summer of resistance” against the Dakota Access pipeline and she was at today’s rally.

“The pipeline route was originally right through our land. It has now moved a little bit beyond our land, in my neighbor’s field. He is very against it, has not settled with Dakota Access,” she told Radio Iowa. “We’re really concerned, but even if we weren’t directly affected, all of Iowa’s affected.” 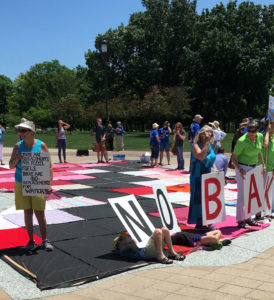 Brenda Brink of Huxley made a huge quilt of the state of Iowa for today’s protest on the statehouse grounds.

“It’s patchwork art that’s raising awareness. Black through the middle because those are the 18 counties that I know that the Bakken pipeline is slated to go through,” Brink told Radio Iowa. “And it looks like those are the ones affected, where everything else is nice and clean, but we know that if and when the spill happens, that the rest of Iowa will be affected because of all the watersheds and the rivers.”

Adam Mason, an organizer for Iowa Citizens for Community Improvement, spoke to the crowd with a bullhorn. Mason said Dakota Access does not have all the permits it needs to engage in construction along the entire route in Iowa.

“They still don’t have 64 authorizations across every waterway in Iowa. The Army Corps is the one that decides that and they haven’t made up their mind yet. So do we want to meet with the Army Corps?” Mason asked, getting this response from the crowd: “Yeah!”

Mason led the crowd in anti-Bakken pipeline chants and he vowed that “oil will never flow through this pipeline.”

Pipeline developers hope to ship crude from the Bakken oil fields in North Dakota to a refinery in Illinois.