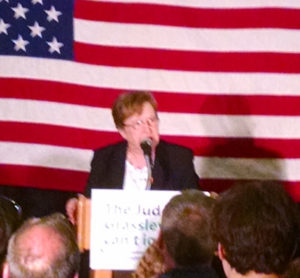 Patty Judge talks to supporters after winning the Democratic primary.

Democrats have selected two women to run for federal office on the Iowa ballot this November.

A man who ran for congress in 2014 has won a shot at a congressional seat in southwest Iowa in 2016 and Congressman Steve King has easily defeated a Republican challenger in his campaign for an eighth term in the U.S. House.

Former Iowa Lieutenant Governor Patty Judge finished ahead of three men in the race for the Democratic Party’s U.S. Senate nomination and will face Chuck Grassley in November.

“Thank you all, thank you very, very much, and thank you for staying up beyond bedtime for us tonight, we appreciate it so much,” Judge said during remarks to supporters in Des Moines.

She wasted no time in going after Grassley and his decision to not hold a hearing on any Supreme Court nominees until after the November election. 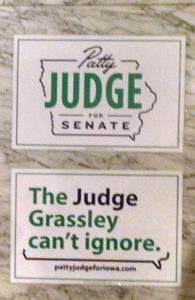 “As I’ve said before my friends and I am sure I will say again — I am the Judge that Chuck Grassley cannot ignore,” Judge said, to cheers.

Judge pledged to push for a vote on whomever a president nominates to the court.

“Just like you and like Iowans across the state, I am really fed up with Chuck Grassley’s excuses for not doing his job. Friends, despite what he told us, it is not about letting the people decide who will sit on the Supreme Court — we already did that. There is no excuse for not holding those hearings, none,” Judge said.

Judge said Grassley’s is not holding Supreme Court confirmation hearings because he wants Republican presidential candidate Donald Trump to select the next judge.

“Chuck Grassley said recently that he is not concerned about the inflammatory rhetoric that’s coming out of the Trump campaign. Really? You know I am,” Judge said. “…While Chuck Grassley is in Washington, D.C., I will start the general election campaign in Washington, Iowa, because I am in this race to represent the people of Iowa and to give them a voice in the United States Senate again.”

State Senator Rob Hogg of Cedar Rapids finished second in the four-way race. Hogg said he’s “obviously personally disappointed” by the loss, but is ready to support his party’s nominee.

“For many reasons, we need to get Iowans to rally around Lietenant Governor Judge and get her elected to be our next United States Senator,” Hogg told Radio Iowa.

Hogg said he made climate change a “signature issue” for his campaign and there’s “a lot more interest” among voters for solutions. Hogg, who has two years remaining on his term in the Iowa Senate, has no regrets about the way he ran his campaign.

“People are sick and tired of the politics of the negative back-and-forth. That’s bad for our country,” Hogg said. “We need to be able to have a better kind of politics, because that’s what’s necessary to make congress function again.”

“I think entering early was key,” Vernon told Radio Iowa this evening. “I think work ethic, I mean, we just never stopped work and, you know, I think for me I built on what we learned and the friendships I made in the 2014 cycle.”

“He has talked about privatizing Social Security and voucherizing Medicare. I think those are things I’m going to call him on,” Vernon said, “using the people’s dollars, the federal dollars, to promote himself as he’s done with nearly half a million dollars.”

No other member of the U.S. House has spent more than Blum on mass mailings and communications from his congressional office. Christopher Budzisz, a political science professor at Loras College in Dubuque, has been watching Vernon’s primary race against Democrat Pat Murphy of Dubuque.

“The advantage she had with money, with endorsements and the length of campaign that she ran –starting basically when Blum got in (office) — I think really paid off for her,” Budzisz told Radio Iowa.

This race will be a target for Democrats and Republicans will also spend to try to defend it.

“Large amounts of money will be coming in from outside groups, but the candidates themselves will also have to raise large amounts of money,” Budzisz said. “It’s going to get very expensive, especially since they’re going to be competing for airwaves space with the general election for the presidential race.”

“The real task still lies ahead to ensure that we continue to run another strong campaign as we go to November and have another good election night,” Mowrer told Radio Iowa this evening.

Republican David Young won a seat in the U.S. House in 2014. Mowrer will challenge Young’s bid for a second term this November.

“David Young, over the last two years, has built a record of siding with the Tea Party and Republican insiders instead of voting for moderation,” Mowrer said. “So, he has that record now and he cannot run away from that.”

Congressman King is calling his Republican Primary victory a “referendum.”

“We didn’t spend a single dime buying any ads of any kind or producing them. We didn’t say or do anything negative about my opponent,” King told Radio Iowa this evening. “I will give him his due in this that he didn’t have any issues, so he made the issues about my likeability and my effectiveness and I’m willing to say I’m happy to accept the results of the referendum.”

State Senator Rick Bertrand of Sioux City challenged King in the Primary, the first time King has faced a GOP opponent since King first won a seat in congress back in 2002. King said Bertrand was “recruited” to run this year by agribusinessman Bruce Rastetter, who is Governor Branstad’s number one donor, and by Nick Ryan, a power broker GOP consultant.

“They wanted a congressman that they could tell what to do and what not to do, and they figured out I could not be owned, so I think that settled that question,” King said.

King said he’s glad this chapter is over.