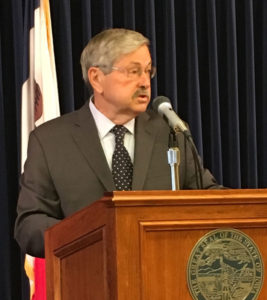 Governor Terry Branstad is in California today, at the BIO International Convention. He’s touting a new state tax credit for companies that develop new uses for the byproducts left behind when ethanol and biodiesel are made.

“I went to Montreal last year to tell them that we were proposing it. It passed the House,” Branstad says. “This year it passed both the House and the Senate. It’s now law, or I guess January 1st it takes effect, but we’ve already got a number of companies that are looking at it.”

Starches, sugars and oils are the left-overs from “biofuel” production. Iowa’s new “biochemical tax credit” will provide up to $10 million a year to companies that develop new products from those left-overs.

“I just think this is the next generation of quality jobs that are going to be able to be created because we have this biochemical tax credit,” Branstad says. “I want the world to know it and this is a great forum to be able to talk about that.”

More than 15,000 executives from companies in the world’s biotech and pharmaceutical industries are gathered in San Francisco for the week-long BIO convention Branstad’s attending. As Branstad meets with executives considering Iowa because of his new biochemical tax credit, he will pitch the idea of setting up operations on or near existing biofuels plants.

“You know, already you’ve got the complex at Eddyville where they’re making all kinds of products,” Branstad says.

Experts say about 30 chemicals left over from biofuel production hold the greatest potential for development.

Branstad will be in California ’til Thursday. Branstad will visit the San Francisco headquarters of McKesson while he’s there. Last year, McKesson picked Clear Lake as the site for a new warehouse in its pharmaceutical distribution network. Branstad also plans to make “prospecting” calls on California-based businesses that are considering expansion plans in Iowa.