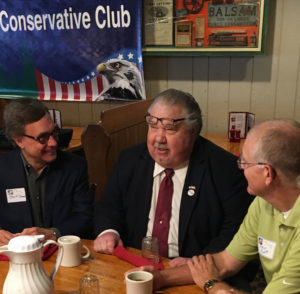 Sam Clovis (center)chats with crowd before his speech.

An Iowan who is national co-chair for Republican presidential candidate Donald Trump’s campaign says Trump is attracting new voters to the GOP and that will be “a benefit” to all Republican candidates this fall.

“Bring it on. I think it’s great,” Clovis told three Iowa reporters this morning. “We’re going to do fine.”

Clovis said Trump feels “a responsibility” to help “downticket” Republicans who are also up for election this November.

“I think we’re going to do that,” Clovis said. “The thing is it’ll bring out voters that we haven’t had in a long time, so there will be a lot of people benefit from this.”

Clovis indicated that part of his job on the campaign is “outreach” and he’s meeting “regularly” with groups that have been part of the Democratic Party’s coalition. That includes organized labor.

“It’s one thing that the Democrats, I think, really fear is what the cross-over vote is going to because he’s been able to attract a lot of those people,” Clovis said. “We’ve collected more votes than any other GOP candidate in the Primary process and how that translates to the General Election, we’ll have to wait and see.”

Clovis was in central Iowa to address the Westside Conservative Breakfast Club in Urbandale. One of the first questions from the group was about Trump’s “lack of judgment” and tendency to shoot from the lip.

Another man in the crowd of conservative Republicans asked Clovis how the campaign plans to counter the notion that a “strong Republican candidate” is viewed as “a potential dictator…who is one step away from Hitler.”

“Nothing could be further from the truth,” Clovis said, adding this conclusion to his answer: “You can’t always trust what you see on TV — just a thought.”

Clovis told the crowd that’s why he and key Trump supporters are traveling the country, speaking to groups on Trump’s behalf and spreading the message that Trump is “decisive, courageous” and will “dramatically” remake the federal government.