You are here: Home / Human Interest / New monument to honor six Iowa brothers who died in the Civil War 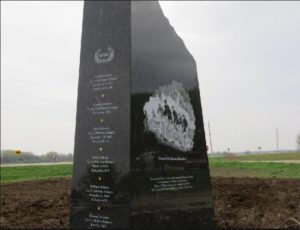 A black granite monument will be dedicated in southeast Iowa next week in memory of an epic loss dating back to the Civil War.

The 25,000 pound monolith was lowered into place in April, along the Great River Road in the town of Toolesboro, southeast of Wapello.

It revives bleak memories of a more famous wartime tragedy for Dan Lilli, with Watts Vault and Monument Company, who helped design the memorial.

“In my lifetime, the only thing I’ve ever known was the Sullivan brothers, the family from Waterloo that lost their five sons in World War II,” Lilli says. “Now, we have six boys from the small community of Toolesboro and they gave their life during the Civil War, all six, so their entire family is wiped out.”

The Littleton brothers all enlisted: George, John, Thomas, William, Kendall and Noah. They died from battlefield injuries, disease, in prison, and in a ferry boat accident.

The story gradually reappeared two years ago after Louisa County historians began to connect the dots. It started with a newspaper clipping discovered by Tom Woodruff, a veteran of the Korean War.

“As far as we know, it’s the largest loss of life from any one immediate family in the history of all U.S. wars,” Woodruff says. “Occasionally, you find a story that you don’t have any choice, it’s the right thing to do. To have this kind of heritage, I think it means a lot to the family.” 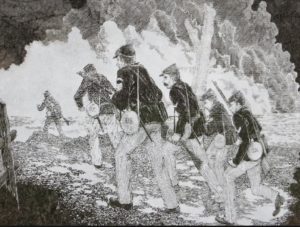 The brothers left behind four sisters and today’s descendants had never heard of the family’s sacrifice more than 150 years ago. Jake and Jennifer Shoppa from Muscatine are the great, great, great, great grandkids of Permelia Littleton.

“No, we did not know anything about it. The story had completely died out,” Jake Shoppa says. “The context of being an American and having these six boys who all went to serve for the Union in the Civil War to help end slavery, wow. That would be the first thing I would say, was wow.”

Jennifer Shoppa adds, “They all worked the farm together and then one day they all left. Yeah, there’s a lot of pride there.”

This modern day headline from a war that ended in 1865 is getting critical recognition; documentary maker Ken Burns is aware of it, and Des Moines historian John Busbee has been commissioned to write a book.

“As people hear about the story, it’s not just so much about the Littletons, but I think it’s about the legacy of what the Civil War privates and soldiers did because that was the foundation of the Army,” Busbee says. “It wasn’t the officers. It was the boots-on-the-ground front line people that so many families with their descendants connected to the Civil War can identify with.” 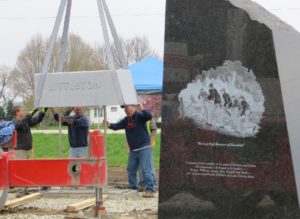 The granite monument is sheared off at the top, symbolizing lives cut short. The design was conceived by Iowa City artist Will Thomson.

“The feeling that I want to try and impart has to do with reverence for their valor and dedication,” Thomson says. “The drawing represents six soldiers who are disappearing into the fog of war. I think this particular monument has to be sobering and awe-inspiring at the same time.”

The newly-landscaped memorial is located next to another Louisa County landmark; a set of Native American burial mounds. Organizers expect a large crowd of Iowans on Flag Day, including dignitaries and Littleton family ancestors when the monument is dedicated next Tuesday afternoon.