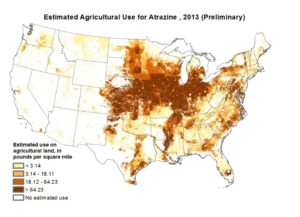 Iowa corn growers could face higher input costs if a federal agency moves forward with efforts to strictly limit the use of a popular pesticide.

An EPA report on atrazine shows the agency has concerns with the chemical’s impact on birds, mammals and fish.

Scott Merritt, a spokesman for the agriculture industry’s Triazine Network, says growers know to follow the guidelines on atrazine carefully.

“We think the label is sufficient the way it is. You can’t use it around water,” Merritt says. “There are setbacks in the application of it, have been for a decade, and we think those are very reasonable.”

The EPA suggests farmers should only be allowed to use eight ounces of the chemical per acre, when they typically will use two pounds for that much ground. Merritt says the proposed change could be a financial detriment to Iowa growers.

“It could increase by having to change products or limitations on his application or just his ability to grow a crop and not compete with weeds,” Merritt says. “We’re seeing numbers almost up to $60 an acre would be the added cost to the farmer.”

Environmental groups, including the Natural Resources Defense Council, have spent years urging the EPA to ban the use of Atrazine.

He says farm groups and individual producers will be making their feelings known to the EPA. The public comment period is open until August 5th.

Environmental groups, including the Natural Resources Defense Council, have spent years urging the EPA to ban the use of Atrazine.