You are here: Home / Fires/Accidents/Disasters / High winds, hail, a tornado and flash flooding in Iowa Tuesday 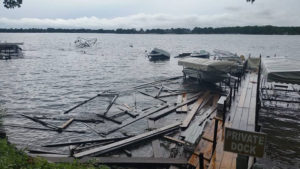 “Just skirted the edge of an acreage,” Ehret says, “and destroyed an older shed, kind of a lean-to of sorts.”

The other buildings on the property were not damaged.

“It was a pretty weak tornado, but it did throw the debris out into the field a ways and lofted some of it up in the air,” Ehret says, adding some of the debris was found a mile away from the acreage.