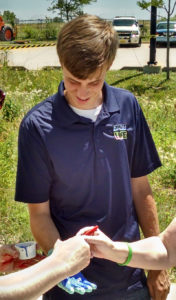 Joey Gase gets his hand painted to make an imprint on his car.

Cedar Rapids native and NASCAR driver Joey Gase made a pit stop in Ankeny Thursday at the DOT Driver’s License station to encourage Iowans to sign up to be an organ donor.

Gase got a quick education in organ donation as an 18-year-old when his mother Mary died suddenly of a brain aneurysm in 2011 and he found out she wanted to donate her organs.

“I didn’t really know anything much at all about organ donation besides when you go to the DMV it’s just a quick yes or no question. And I feel like that’s how it is for a lot of people,” Gase says. “And  at that time I honestly didn’t know if I was an organ donor and had to take out my license and see. And I was.”

Gase says the toughest part was when doctors didn’t come out and tell him that his mom was going to get better.  But he says the family takes comfort in the way the donation of her organs has helped others. 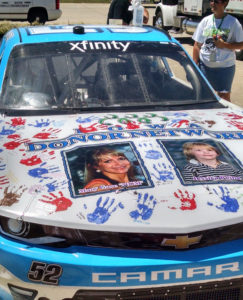 He has a picture of his mother on the front of his car along with another picture of organ donor, Jessica Peine and the logo for the Iowa Organ Donor Network.

Gase says his experience with his mom prompted him to continue supporting the organ donation cause.

“I learned how important it was and how many misconceptions there are out there and how many people are on the wait list, and I wanted to help all of that,” Gase explains. “One of the biggest misconceptions is —  if I am an organ donor, the doctor is not going to do everything they can to save me —  and I learned first-hand with my mom’s experience that’s not the case.”

He says you should get the facts and make your choice about whether you would like to mark your driver’s license to be an organ donor.

“I really encourage everyone to donatelife-dot-net and look up all the facts. Where a lot of people hear about donation is through movies and TV shows and stuff like that, and that is where a lot of the misconceptions come from unfortunately,” Gase says.

DOT Motor Vehicle Services Division director Mark Lowe says they are focusing on doing a better job of explaining how motorists can sign up to donate organs.

“We needed to make sure that our staff knew that was an important function of their job and when people come to the station they knew that they were not just being asked if they are an organ donor, but if they wanted to be one. As we’ve tracked that, we are continuing to see increases throughout the state,” Lowe says.

The information about being an organ donor  may be one of the last worries of people who are waiting in line to get a driver’s license or take a test. “And that’s why one of the things we’ve coached our staff about is actually slow and make sure they understand the question and they have a chance to say yes to this,” Lowe explains. “And at the same time we want to make sure that the customers know that this is a decision that they can make, and it is easy to do just by saying yes.”

He says a little more than half of drivers agree to mark their license indicating they want to donate their organs. He says there are about 2.1 million licensed drivers and somewhere between 55 and 60 percent are organ donors.

“Which really puts Iowa very well place nationally — but we just think  we can do better every year,” Lowe says.   Gase had his car at the event and people were encouraged to put their handprints in paint on the car and write a message in support of organ donation.

He is set to run in the NASCAR XFINITY Series American Ethanol E-15 250 at the Iowa Speedway in Newton Sunday.